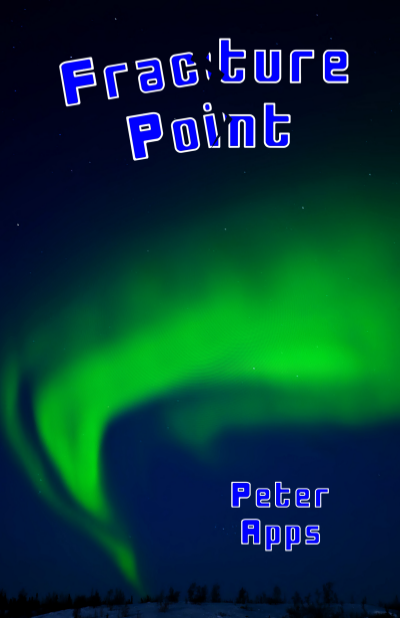 David is a petty criminal with a contempt for authority.

Suddenly it becomes an asset as he tries to lead his friends to safety, always just one step ahead of disaster, but what sort of disaster could lead to a search for water in the middle of London?

Could the Northern Lights herald the destruction of civilisation?

Solar flares can disrupt communications and can knock out power suplies. What happens if the damage is too great, and civilisation reaches its ‘Fracture Point’?

For David and his friends, when the unthinkable happens, water proves to be the key, for both their escape and their survival.

Fracture Point is based on events that have happened and will happen again. This article explains the background to the story.

The next time your bank card is replaced, don't cut the old one with scissors. Instead, bend it to and fro until you see a white line appear. The card's fracture point has been reached and it is now irreparably damaged. Continue to bend it to and fro and eventually it'll split in two. The question in this tale is, how easily can civilisation reach its fracture point before disintegrating and throwing us back into the stone age? What we tend to forget is that the basic rules of survival still exist even if they are all wrapped up in modern comforts so consider the survival rule of three. We can survive,
- 3 minutes without air,
- 3 hours without a regulated body temperature (shelter),
- 3 days without water,
- 3 weeks without food.

Now let's think about what would happen if the electrical supply was disrupted? You'd think that it wouldn't affect the air so we'd have more than three minutes but what about skyscrapers and high rise office blocks? They rely on air conditioning. Emergency generators would kick in but for how long? If buildings running essential services became uninhabitable what would happen?

Imagine that it is October and you are contemplating the onset of winter with neither central heating, nor electric or gas fires. Plenty of warm clothing and huddling together would help but the elderly and the disabled would be affected almost at once, even in October.

Although there would be tragic consequences, civilisation could probably survive the shortest two deadlines but what about the third? More than anything we take water for granted. We have a modern, efficient supply that rarely fails. But what if the computers controlling it failed? What if engineers could not be contacted, let alone get to a repair, and what if the water processing units failed disrupting supplies at source?

Maybe events would proceed more slowly than I depicted in Fracture Point but more than any other utility the water supplies would have to be maintained from day one. The water companies will tell you that they have stocks of emergency fuel and could keep going.

The problem is that they're dependent on other services. Try sending a repair team to a burst pipe, for a start. Vans and lorries need fuel. Would petrol stations be operating albeit far more slowly as the pumps were hand cranked or would staff be unable to get in because of their own problems? How would it be paid for without cards or credit. What problems would fuel companies have distributing it to outlets. Assuming fuel was available what would the roads be like without traffic signals, lighting and so on.

Consider the emergency backups that we're told about. How many would prove to be ineffective and how long would they last? Is maintenance never neglected? Are they all tested and maintained regularly? The water utilities are dependent on communications, which in turn, relies on power. What happens if all three suffer damage? The answer should be that it's all idle speculation because we couldn't lose our utilities so completely, could we?

In 1859 a solar flare struck the Earth providing spectacular displays of the Aurora Borealis as far south as the Caribbean. Not only the most powerful flare ever observed, it was the first one to be recognised. It was reported by British astronomer Richard Carrington and independently by an observer named Richard Hodgson. The event is named the Solar Storm of 1859, or the “Carrington event”. Although the newly established telegraph service was badly damaged few noticed. If a farmer was working his field he might have stopped and stared as electrical sparks crackled along telegraph wires but it would be a few moments' entertainment before he continued with his work. Not even businesses in the biggest commercial centres were affected. Ships still sailed, trains still left on time and the post was still delivered. It was a different story when a much weaker flare struck in 1989. There were no spectacular displays of Northern Lights but a power spike blew transformers in the Canadian power grid. Six million people were without power for nine hours.

These incidents pose vital questions. Was the Carrington Event the worst that the sun can throw at us? What happens if it isn't? How often do they happen? There are all sorts of variables that could affect events, primarily, the intensity of the flare. Power cables running for miles would almost certainly induce power spikes to blow equipment connected to it. Not only power cables. What about the power lines of electric trains? The digital age relies on computers. They don't have to be damaged. Sensitive chips just need the odd molecule to be affected to create an error. It happens all the time but how many computers might need a reboot at the same time, before the system they're running breaks down.

The electrical industry is aware of the risks from solar flares and tries to make their systems safe. However, the one lesson we've learned from the Titanic disaster, through the devastation to New Orleans caused by hurricane Katrina, to the 2011 earthquake in Japan, human endeavours are easily overwhelmed by nature. In the case of the sun we are still learning about its power and strength. Another Carrington event will happen, maybe it will be even more powerful and it will test our defences.

With our dependence on electronics, could it push civilisation to its fracture point?

Just finished Fracture Point. My compliments to you, Peter. I remember so clearly word for word the official Government advice in "Appendix 2" An exercise in fantasy, rich in drawings of people crawling under a table. Complete and utter carp - spelling error intentional. You obviously remember it too. Round about 1964 I am correct, about a year after the Cuban crisis, where every household in the country was to get one. Concerning Fracture Point, well written, cleverly thought out and witty too at places. I have always said we are far, far too dependent on electronic banking. All they have to do is drop just ONE medium yield neutron bomb at 36,000' and every bank in London would fold - it would just blow out the entire system where there'd be no money for anybody. Some of the biggest heists in history are carried out with the use of a swipe card. See you in a couple of weeks. Anon, Fred.

This novel is a fascinating story of the breakdown of society as the result of a solar flare impacting Earth and the disastrous effects that follow.

Peter Apps extrapolates the impact a solar flare had on parts of Canada in 1989 into the consequences of a massive solar flare impacting on at least the UK and the USA and the consequences of the out-take of the electricity grid right across those countries, in particular the London area where the novel is set. Such a collapse would either fry or negate all the computer systems that now so control our lives.

The novel focusses on David, the group that grows around him and how they cope with the ensuing breakdown of Society. Government breaks down as it proves unable to provide basic facilities - safe drinking water in particular, but also food supplies, transport, protection and security. Gangs seize control of small areas.

David and his group are resourceful with a workable plan for their future. They encounter a naval group that is trying to enforce some kind of local order in their area but find it difficult to adjust to this situation where their Command structure virtually ceases to exist. An Army group joins them, experiences the same problems and want to regard David as the embodiment of an 'elected Government' and so able to give them orders. David, a former petty criminal is horrified.

David is shown to be a human being not a detached superhero. So he too suffers from the stress everyone is feeling, grieves for his own lost family and finds comfort and support in his group.

Is the basic scenario of the book credible? Unfortunately yes.

Would Government break down so completely and so quickly? Probably yes.

During the Cold War extensive and detailed Plans were drawn for dealing with the aftermath of nuclear conflict, that Peter Apps refers to in two Appendices and Emergency Planning Offices were set up. Exercises are held from time to deal with some Emergences e.g. Terrorist attacks, but they were and are all dependant on Communications being at least relatively intact and the main destruction localised.

In 'Fracture Point' those are almost non-existent.

The London Riots (at about the same time in January 2014 as the solar flare was coming) show how quickly Law and Order can break down in 'ordinary' situations, as have countless Demonstrations deteriorated into violence before and since, and those were relatively contained, relatively quickly in a generally secure-feeling wider society. In the portrayed situation that 'secure' feeling is no longer there.

Similar situations happen in the giant Refugee Camps around the world at the present time where there is minimal effective 'Government' and massive shortages in basic water, food and shelter facilities have shown repeatedly how Gangs will seize control.

'Fracture Point' realistically shows in story form what could happen here if a massive solar flare ever does hit Earth.